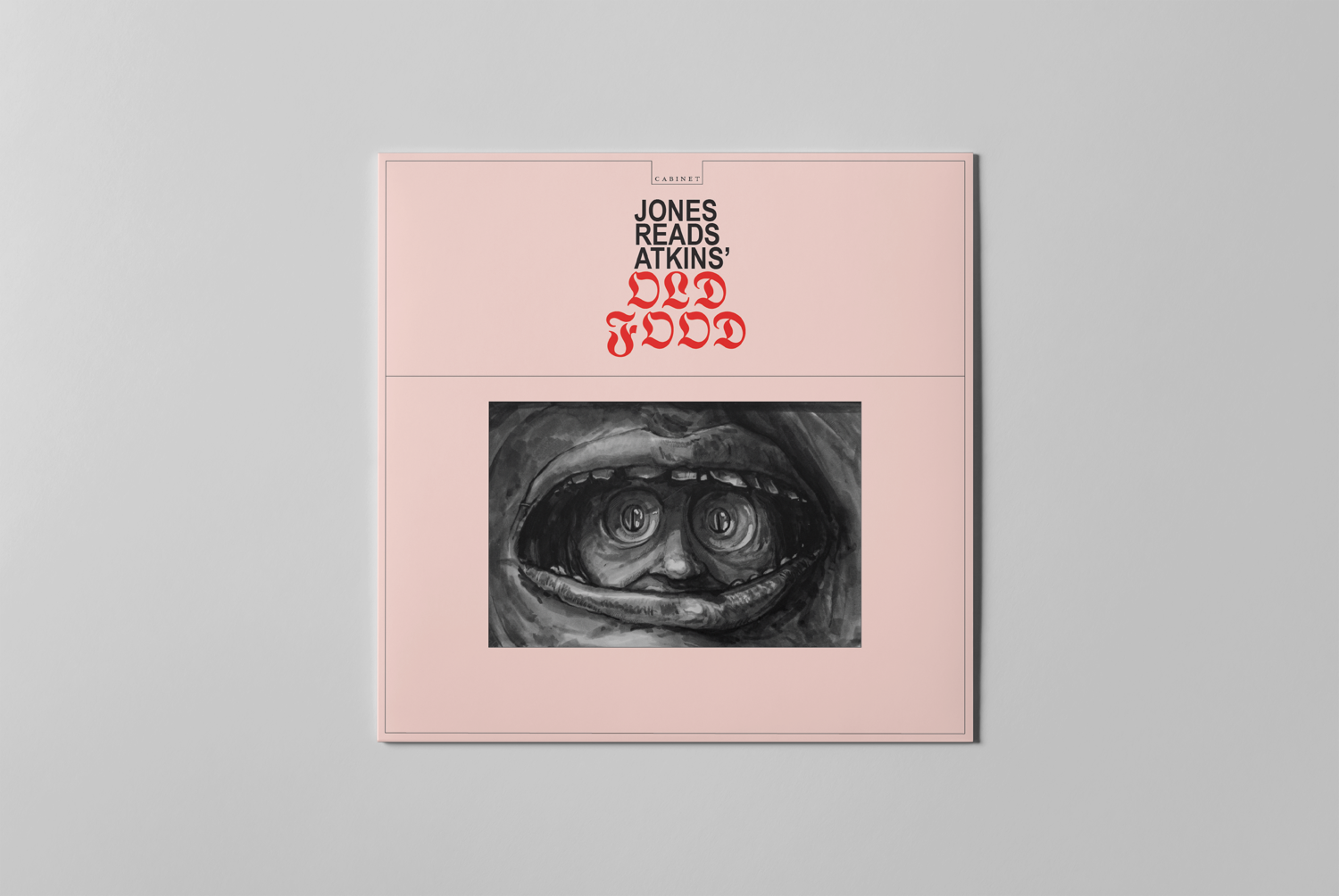 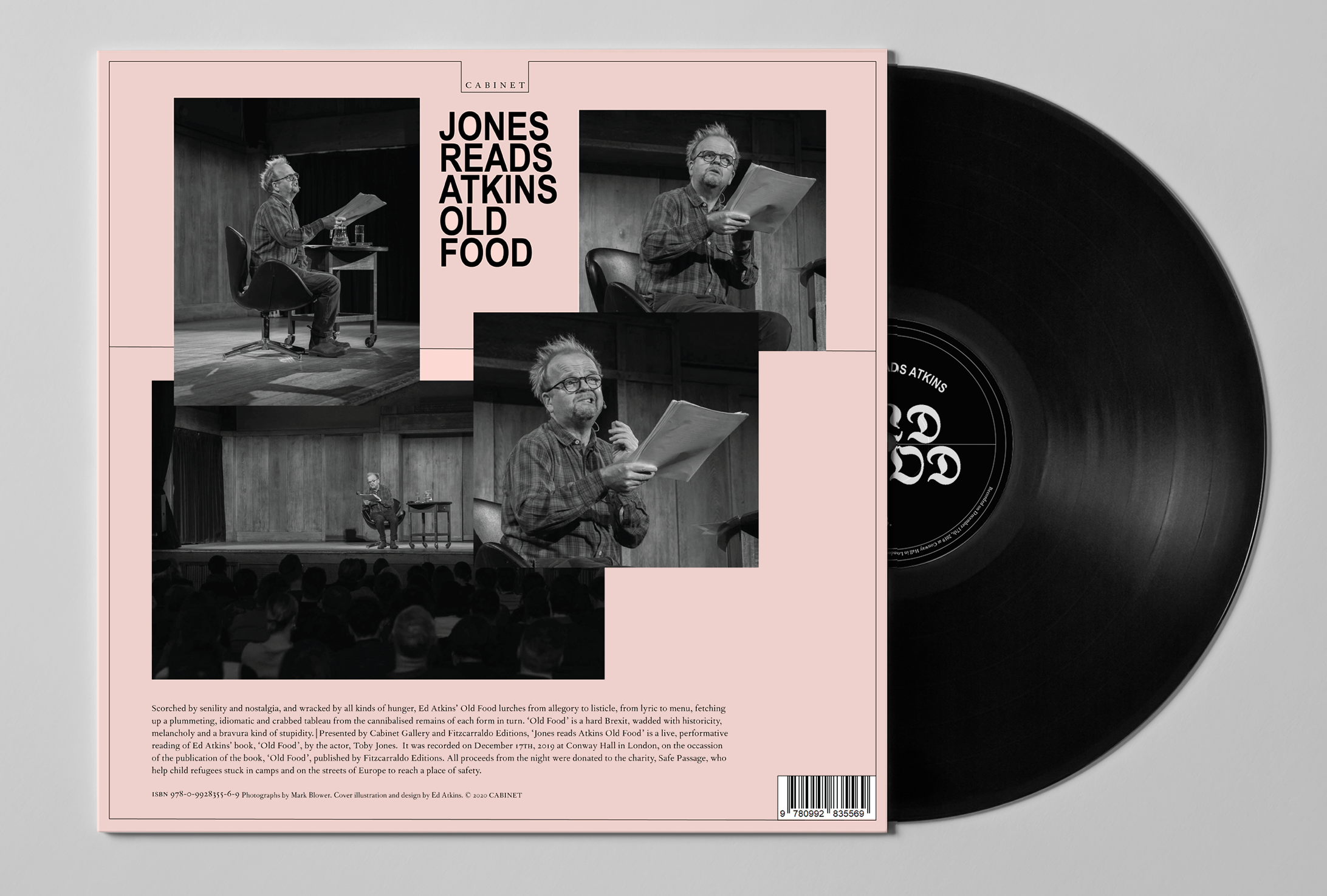 Scorched by senility and nostalgia, and wracked by all kinds of hunger, Ed Atkins’ Old Food lurches from allegory to listicle, from lyric to menu, fetching up a plummeting, idiomatic and crabbed tableau from the cannibalised remains of each form in turn. ‘Old Food’ is a hard Brexit, wadded with historicity, melancholy and a bravura kind of stupidity. | Presented by Cabinet Gallery and Fitzcarraldo Editions, ‘Jones reads Atkins Old Food’ is a live, performative reading of Ed Atkins’ book, ‘Old Food’, by the actor, Toby Jones. It was recorded on December 17, 2019 at Conway Hall in London, on the occassion of the publication of the book, ‘Old Food’, published by Fitzcarraldo Editions.

Release date to be announced 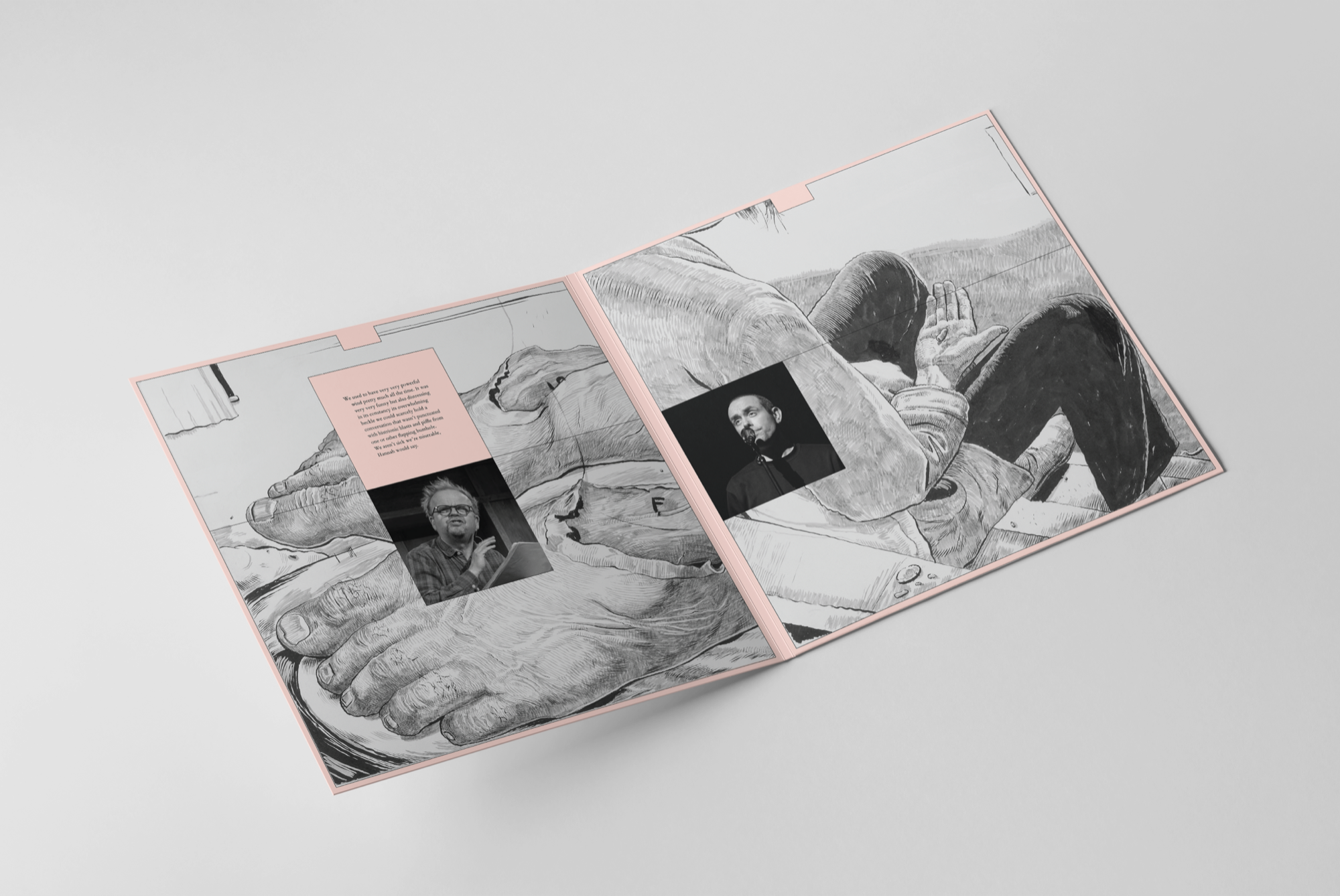 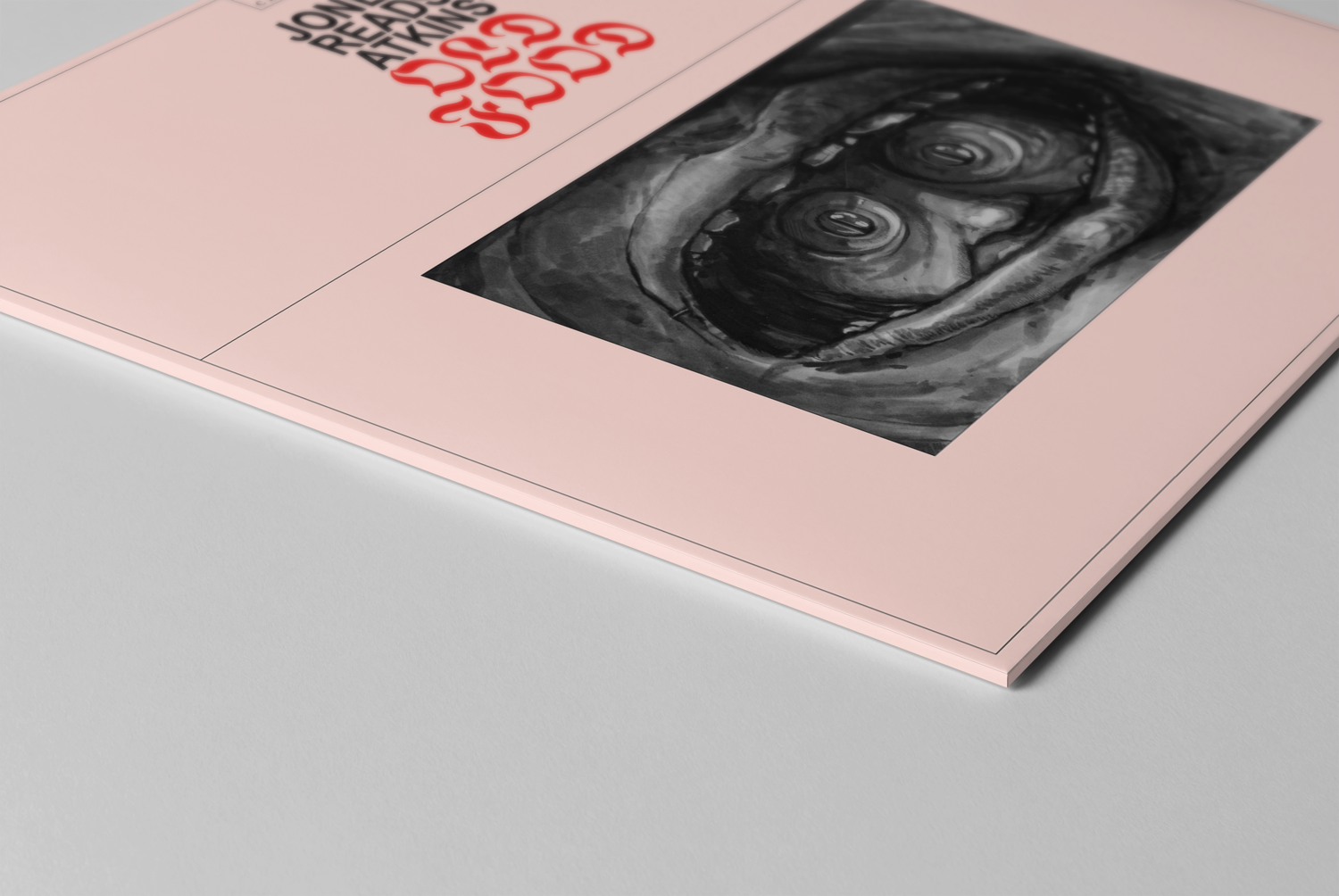 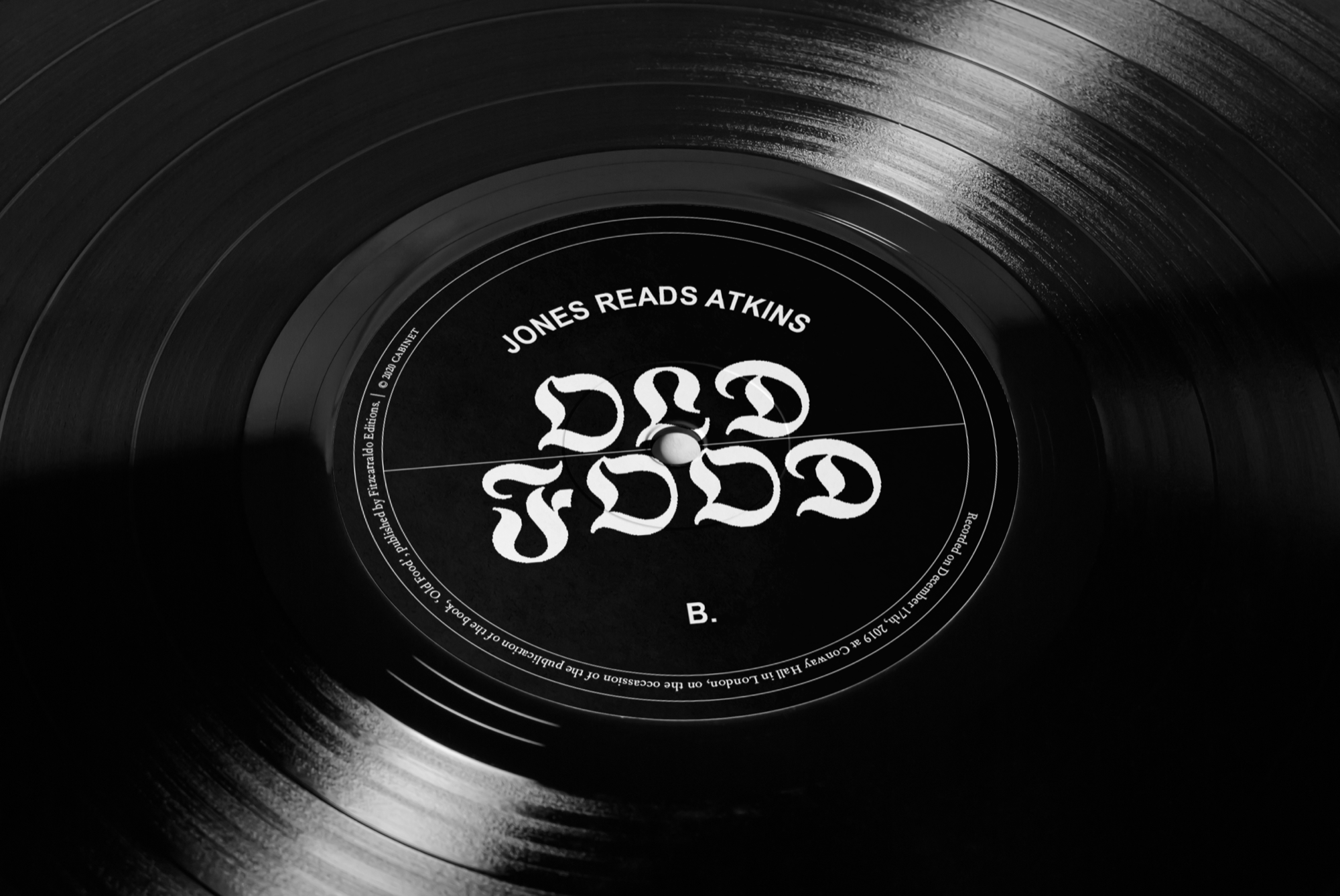 An extract of Old Food by Ed Atkins

It was ever easier to simply remove

the breasts with an knife and ditch

the remainder, rather than commit to

the arduous plucking, but they’d take

your hand if the birds weren’t wholly

bald and otherwise unscathed, tho,

so. An informal lunch of pot-roast

pheasant, swum over with loaded,

swarthy prunes and a plausible

Sirs got racy in the dining room.

blasted and tuneless till red bowls

of bread pudding calmed with a

sultanas and frangible moments of

of a dark shag threaded with Mike’s

lenient hash dispensed from a panel

heraldry, and a smouldering hemp

masks made of I think hide. Ducked

out through an open sash on the

south side and sprinting out across

and re-enter the feral and humid

shrilling in a blackened pan of raw

attacked the bridge between the nasal

bit and the throat. Then the smell of

reptile beef and Hannah’d think of all

the kitchens in the world and describe

them in exquisite detail.

Fleurie? Drinking used to be as

basic as upending an animal’s open

neck into your mouth. We used to

open an animal and simply tip what

come slipping out into shot glasses,

drinking until nothing more came

out or what was coming out was cool

and grey and made you down, washed

away with a smaller animal’s openup

or some oat milk.

Custard tarts hot from the oven were

welcomed by sundry cousins down

for the weekends of Augusts. They

were wiry, angry types in sacking

and had broken skin. They would

bring scarcely edible shite from their

on curling velour in a language we

Foreign muck that howled in the

fled to be sent back for seconds,

gorgeous and us full of their dread,

September, news reached us of their

mourn them traditionally: without

a second thought. There was feasts

of filled bread, though. Bananas

weren’t available. Burgers were quite

something, sat happy in a celeriac

of vast marrows would turn out to

grewed more of them, twice as nice

roasted with lemon thyme and garlic

and more obscure, wild alliums, the

tomorrows, blitzed to a silky soup

for poor camping in the graveyard

under the shade of the willow when

the graveyard had no dead in it yet,

none of the interred being dead,

simply the poor, sharing the soup and

waiting to basically fill the graveyard

up with themselves. The last would

bury the second to last then clamber

on top and sort of draw up the soil

duvet over themselves, starting at the

boots and eventually into the mouth,

the eyes and the ears packed to never

mellifluous on the still air from the

beautiful houses beside the graveyard

that were made of imported stone.

There wasn’t a graveyard before that

there was just a funny feeling. We did

all we could, I suppose. We gripped

them in our um prayers. We charged

small glasses with a nondescript froth

and raised them to them. We planted

a series of pear trees somewhere,

facing in a walled garden crowded

with wild roses in tea-stained, nuptial

for a distant peal and a hot cricket

concert; the gorgeous flat spuff and

metal caps off of thin glass bottles of

made from the memorial fruit.

Conversations were had between

behind a big bay for hot long release.

So the frying pan sizzle of piss on

sun-dried forage would stir our

with a little lime, skilletted almond

whittles, and more perry for a bonus

perry Hannah made from pears in

with an astonishing amount of wild

by a family of big evil spiders who

bound the mouldering brickwork as

the strangler’s driving gloves they

with polished black knees and The

Shakes, debossed in an whole life

of night and the town’s gone eyes

gathered in hand-tied bouquets of

Lots of unseen movement on the wall

of a bakelite mandible or a porcelain

Newton’s Cradle coming to rest. The

to the pit of your stomach. Horrors

scorned milk in the churn, froze

mirrors. In the mornings maybe a

Perry and sardines used to be taken

beside a heavily spidered wall abutted

were silted and jeweled in the gullies

with a gravel of pink cochineal husks.

Edible looking fish squirmed out their

and meanwhile their eyes’d clouded,

as with the hot skillet on the fire,

surrounded by its juices, some butter

and oil bubbling. Hissing noised as

the fish’s skin got rusted panoply.

Where we’d slashed at it with a long

knife we could make out pale food

peeking through. Wounds would

widen with heat in time and in a field,

in a ditch, we’d cringe beside that

presumably not wanting to die it was

looking at the sky. I put my ear to its

strange mouth to listen to what it had

it said nothing. Not that there was no

sound at all coming out of its mouth

but that it didn’t say

a thing. Whatever it had inside of it

A gloom descended for a bit and we

just stared at the big

darted above, ideally. We ate all the

animals in any old order, without

cooking them and then we looked at

The book of Old Food by Ed Atkins is available from https://fitzcarraldoeditions.com/books/old-food
Violent, emetic, immoderate, improper, impure – that’s to say it’s the real thing. Atkins’s prose, which may not be prose, adheres to Aragon’s maxim “Don't think – write.”
– Jonathan Meades
If “Chocolate coins seemed doubly cryptic with the collapse of banks...” as Ed Atkins writes towards the end of this almost unbearable but compelling work, then dystopia and climate catastrophe are in our mouths and bodies: they pour through cataracts of names of herbs and meats and slime, of commonplace gestures in strange locations, they disrupt spelling and produce unnatural words and the suspension of proper grammar. Atkins’ fiercely flowing anti-poetry takes up the disruption of unthinking indulgence at a point near to where Theodor Adorno left off, moralia now definitively below the minima we need to carry on – other than in the turbulence of the text.
– Adrian Rifkin, author of Communards
Like a McDonald’s hamburger or a cockroach or the Global Seed Vault, Old Food perseveres beyond mortal reason and enters a Beckettian afterwards. We cannot know the reason for all those tears, and it scarcely matters.
– Vivian Rycroft

Toby Jones is a BAFTA Award Winning British actor renowned for his roles both on screen and on stage. Recent screen performances include the BBC’s in Don’t Forget The Driver, a series he co-wrote with Tim Crouch and Netflix’s The Dark Crystal: Age of Resistance. Upcoming film credits for 2020 include; Louis Wain, Toby will star alongside Benedict Cumberbatch and Claire Foy, The Last Thing He Wanted, written and directed for Netflix by Oscar nominated Dee Rees and as Reverend Chasuble in an animated adaptation of Oscar Wilde’s The Canterville Ghost.

Ed Atkins is an artist who makes all kinds of convolutions of self-portraiture. He writes uncomfortably intimate, debunked prophesies; paints travesties; and makes realistic computer generated videos that often feature figures that resemble the artist in the throes of unaccountable psychical crises. Atkins’ artificial realism, whether written or animated, pastiches romanticism to get rendered down to a sentimental blubber – all the better to model those bleak feelings often so inexpressible in real life. In recent years he has presented solo shows at Kunsthaus Bregenz, Martin-Gropius-Bau in Berlin, Castello di Rivoli in Turin, the Stedelijk Museum in Amsterdam, and Serpentine Gallery in London, among others. His artwork is the subject of several monographs, and his writing has appeared in October, Texte zur Kunst, frieze, The White Review, Hi Zero and EROS Journal. A Primer for Cadavers, his first collection, was published by Fitzcarraldo Editions in 2016. Ed Atkins is represented by the Cabinet Gallery in London.