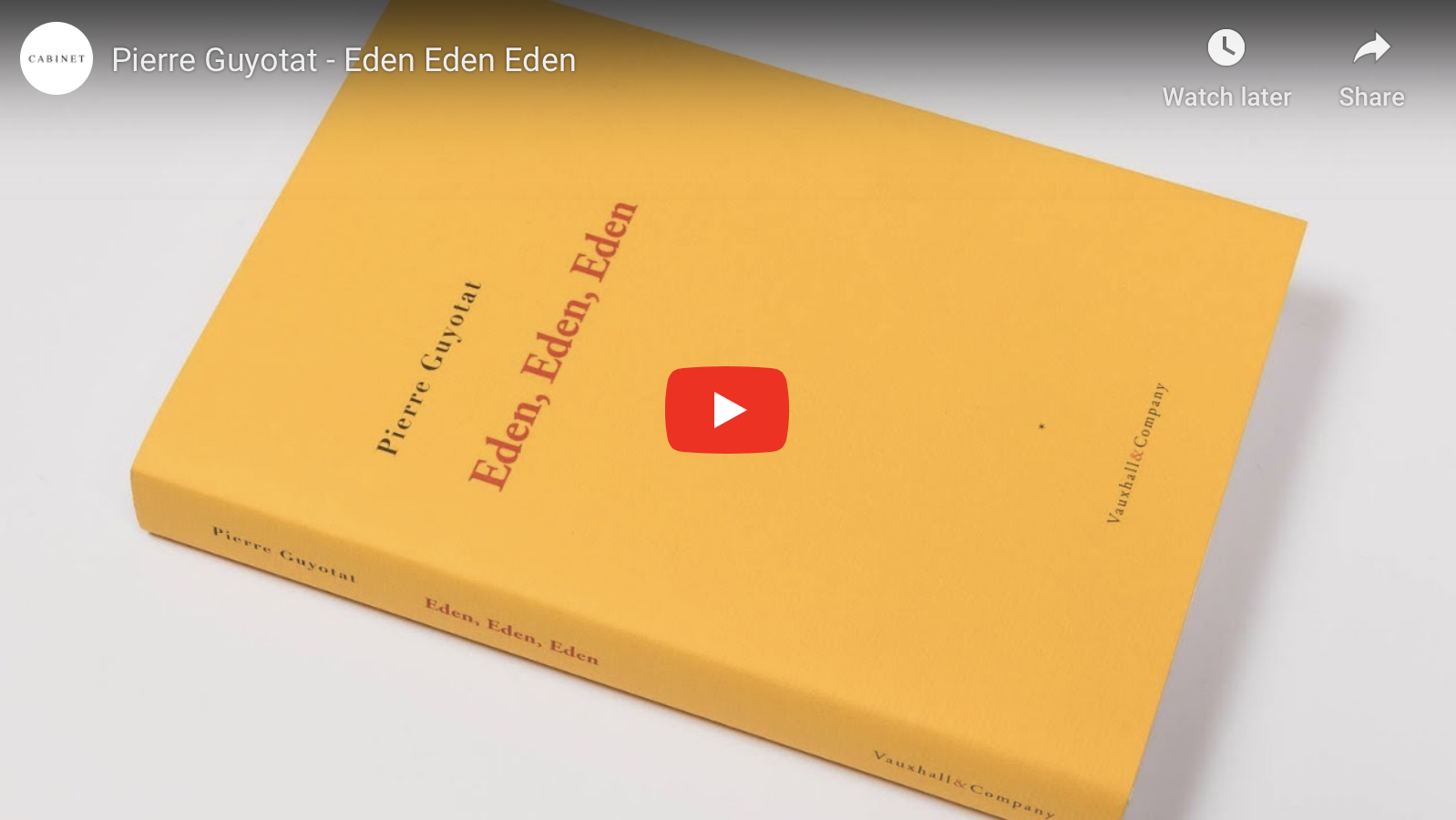 The question of celebrating the fiftieth anniversary of the publication was considered during the last months of Pierre Guyotat's life. Taking inspiration from the fifty years of Tombeau pour cinq cent mille soldats, in 2017, which gave rise to live hours of readings in French, English, German, Japanese and Russian, the Association Pierre Guyotat, established by the author for the conservation of his work will celebrate the fiftieth anniversary of Eden, Eden, Eden on September 9th, by organizing fifty readings in fifty different places in France, and around the world.

Each reading will be different. Each venue will consider a precise meaning within the work, life and world of Pierre Guyotat, and it will create their own reading, according to their own means for its audience, attending physically or online. Private and public partners, artists, authors, and admirers will join together to manifest the life of this great visionary text. The readings will take place in French, in the languages of existing translations (English. German, Spanish, Dutch, Japanese, Russian...) or provide an opportunity for new translations (Arabic, I lebrew, Italian...). They might be the result of an individual or a collective effort, and each one will be unique, conceived by, and for, each specific venue.

The reading at CABINET will commence at 11.30pm on 8th September and will finish shortly after midnight on 9th September.

Since its release with legendary publishing house Gallimard on September 9th, 1970, Eden, Eden, Eden, the work of Pierre Guyotat, a young author then in his thirties, has provoked scandals, fascinations, and marvels. Deemed a “Saharian fiction”, it was published with forewords by Michel Leiris. Roland Barthes, Philippe Sollcrs, and was instantly praised by Michel Foucault; upon being censored, it gained immediate international support by the likes of Joseph Beuys, Pier Paolo Pasolini, Pierre Boulez, Italo Calvino, Jean-Paul Sartre... It is a legendary work.

Fifty years later, the work of Pierre Guyotat - who passed away on February 7th of this year - exerts an ever-growing impact, having proven to be prescient of a world on the verge of transformation, through violence, sexuality, decolonization, cosmology. It’s the endpoint of colonialism as well as the starting point of a new history, for language, offering a new vision of the present, the past, and the future.

Pierre Guyotat (January 9th, 1940, Bourg-Argental – February 7th, 2020, Paris) is the author of one of the most radical oeuvres of the late 20th and early 21st centuries. An early critic of colonial oppression and oppression of all kinds, he has played a major role in the opening-up of culture, sexuality, and art by developing the most extreme form of epic fiction. His texts, starting with Tomb for Five Hundred Thousand Soldiers (first released in 1967) and Eden, Eden, Eden (first released and immediately censored in 1970, with forewords by Roland Barthes, Michel Leiris, Philippe Sollers, and immediate praise by Michel Foucault) have changed the fabric of French language. His work has been widely translated, in languages such Italian, Japanese, Russian, German, English, Dutch, Spanish... Idiocy, his last published new book (2018), won the Prix Médicis, the Prix de la langue française, and the Prix special of the jury Fémina (American, Chinese, Spanish, German translations forthcoming). His archive is held at the Bibliothèque nationale de France, France’s Public Library. His drawings have been exhibited in the most prestigious museums and galleries in Paris, Berlin, London, Rome, New York, Los Angeles, Brussels and will be featured in Manifesta in the Fall 2020. 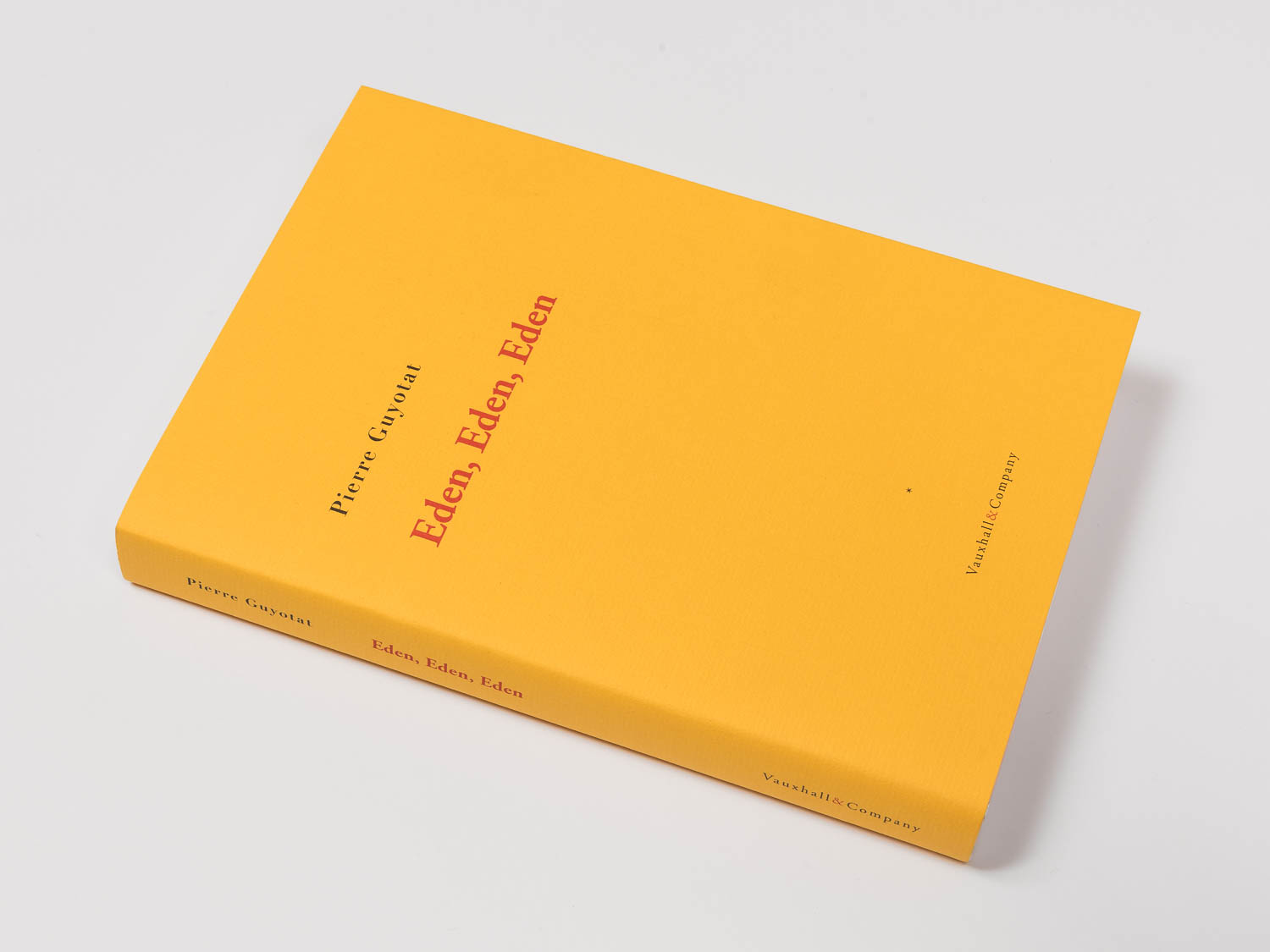 Eden, Eden, Eden
Translated by Graham Fox
Published by Vauxhall&Company, 2017
Softback, 276pp, 206 x 142 mm
Printed on 100gsm Arcoprint Milk & 175gsm Colourplan Laid.
ISBN 978-0-9928355-3-8
£30.00 GBP
Originally published under the title
Éden, Éden, Éden
Éditions Gallimard, 1970
Copyright © Éditions Gallimard, 1970
This edition Copyright © Vauxhall&Company 2017
Translation copyright © Graham Fox, 1995 & 2017
Vauxhall&Company Series Editors Paul Buck & Catherine Petit
The book can be ordered from our AbeBooks account by clicking here
A hand-annotated limited edition by Pierre Guyotat is also available, priced at £350 GBP. Further details are available on request from Cabinet Gallery (art@cabinet.uk.com).
First published in France in 1970, immediately greeted by both furore and acclaim, today Eden, Eden, Eden is recognised as one of the major works of the last century.
This edition is a much-revised translation of the out of print English version originally published in 1995. It also includes new translations of the original prefaces by Michel Leiris, Roland Barthes and Philippe Sollers, plus a postface by Paul Buck.
"Brought forth in an egalitarian way, or almost, beings and things are offered here for nothing more than what they are in the strict reality of their physical presence, animated or not: humans, animals, clothes and other utensils thrown in a mêlée in a way close to panic, that evokes the myth of eden because it obviously has for stage a world without morals or hierarchy, where desire is the rule and nothing can be declared precious or repugnant.
An implicit poetry that is sometimes replaced by an explicit poetry: those moments when, above the magma only disturbed by the quest for fulfilment led by each protagonist, human words appear, all the more moving for they seem to emerge – as if by miracle – from a layer of existence in which all words have been abolished."
from the preface by Michel Leiris
"To stretch the powers of one single sentence to the material, divided teeming carried forth through an unrelenting drive. Organic and celestial mechanics, biological, chemical, physical, astronomic. “The natural science will later subsume the human science as the human science will subsume the natural science: There will be one science” (Marx). On the very first page of Eden, Eden, Eden, see that inconceivable theatre: flint, thorns, sweat, oil, barley, wheat, brain, flowers, ears of wheat, blood, saliva, excrement... See the golden space of matters and bodies, endlessly transmutable, rhythmic."
from the preface by Philippe Sollers
For further reading on Pierre Guyotat please click here