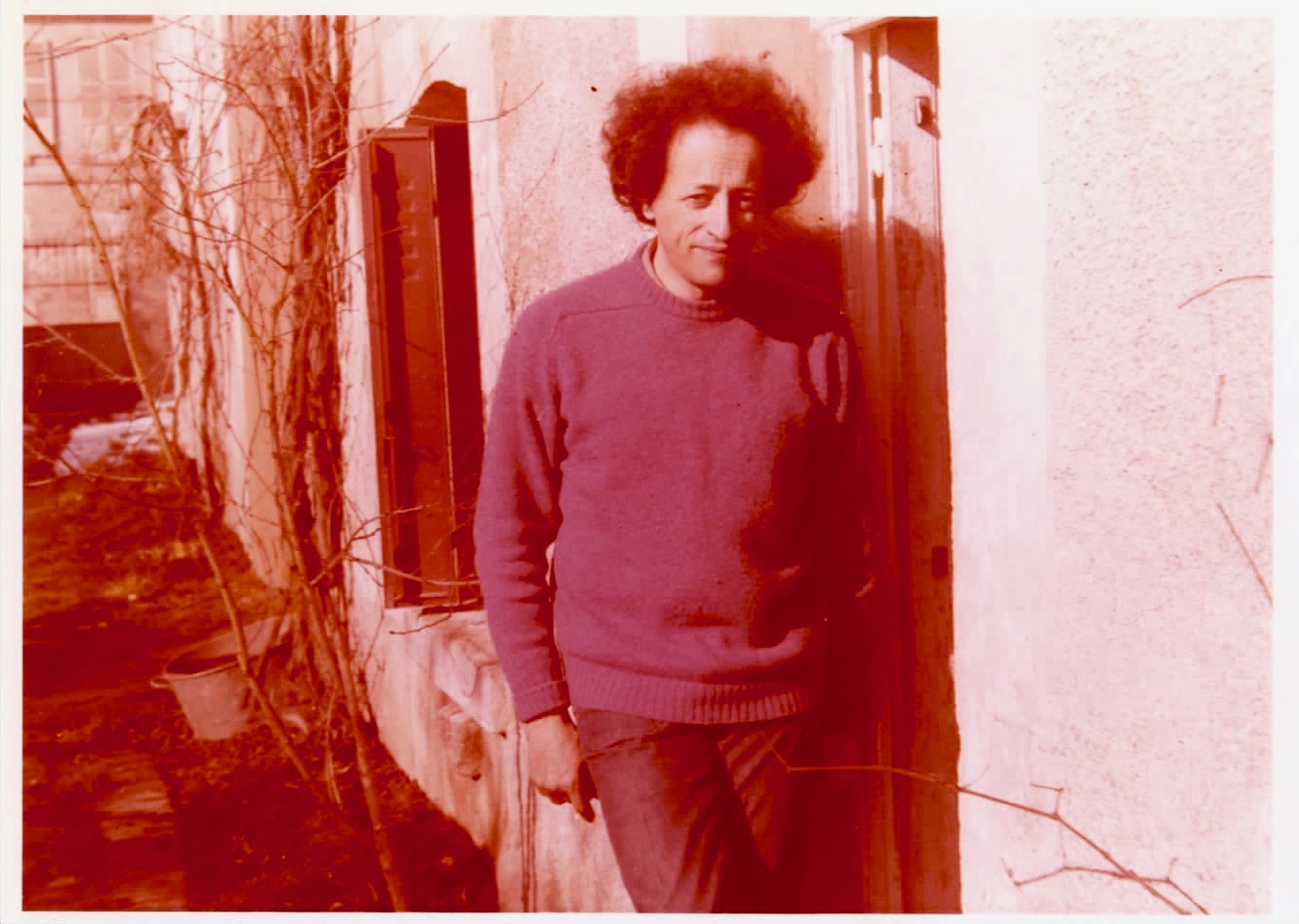 from The Book of the Forgotten
Bernard Noël

When one begins something, it’s already too late to remember the beginning. Once is
only once by making its forgotten be part of the forgotten. The mouth is empty. If it wasn’t, it
couldn’t say anything.

Today, like the others, I’ve lived through it once, and that once, that unique once is the only
thing that makes it like the others. But how come that likeness makes me forget the unique?
And that living is the price of that forgotten?

Once someone was writing here, and his hand remembers scribbled pages. But how many
pages? And what was it writing? All that, it has forgotten. It remembers only that it has a
name and these pages also have a name. These names it can still write, but it knows full well
it would serve for nothing, for it would change nothing.

The forgotten resembles only itself.

Every work should wager on its forgotten. Thus, it would avoid the visible and resemble the
real.

The forgotten cannot be enlarged, and yet it never ceases to increase.

I look at a passing face. If it seems closed on itself, it’s because I refuse to read my forgotten
in its indifference.

What’s written rests in the words of books, and these words are before the forgotten like the
beach before the sea.

Evening light: sun is returned to the absent sun, thus the forgotten…

— You’re speaking of something which escapes you.
— Because I myself escape it.
— If it was any other way, you’d be the thing itself, right?
— Yes, the thing itself.
— Man is living, man is dead.
— Is he life? Is he death?
— There are some irrepresentable states; still, we know what they are.
— You think so?
— Well, let’s say rather we know what they’re not.

If we had no name, we would be like the forgotten. But in being like it, who would be able to
forget us except itself? And the forgotten forgets nothing.

When man didn’t live in history but in time, the past only served him as a storehouse, and
each day being a new day, he had always to remember the future. History has chances; time
never.

To die is not to rejoin the forgotten, it’s to contain it.

The forgotten of which I speak is not to forget.
It’s neither lack of memory
nor of the present.
It’s not solely behind me.
The forgotten is my forgotten,
and I gather the air of its future
in the letters of my name.

I see night. And each particle of that darkness emits darkness. I might as well say I can see
nothing, but that would be to admit that nothing is visible.

Death has a hereafter, the forgotten.

Everything that is, makes forget what has been, but is fed by it: that’s its reserve.

For a book to be like the Book, it must come from the forgotten. Then, it is old like a dream
which seeks its end in our eyes.

Progress capitalises on knowledge, but the knowledge of humanity has always been inferior
to its forgotten. It seems we’re forgetting that forgotten, whence this current impression of
entering death.

Every truth goes in the direction of its forgotten.

The gay science of the forgotten: who could reduce it to consummation?

— We’re passing.
— No, we’re trying to rejoin the passing so that nothing else can pass.

Writing must necessarily forget life, as life will forget the writing. Then, the irremediable
makes its entrance; it’s the reverse of the absolute.

Laughter is the forgotten of likeness: we laugh at that for which we are laughable.

Old stones, once borne away, make other walls and give form to the new house — but their
own form is elsewhere.

“Delight of high noon” (Nietzsche)… Everything is a movement towards a place which
remains equidistant from our desire and our abandonment. That place is the forgotten of
ourself in the forgotten of the place, something which is not at all attained by wandering, but
by leaping… And similarly, there is no return: one falls outside the place. That’s why
remembering it cannot provide an image of the place, for the memory is a line and the place a
point. A point put nowhere, or everywhere.

— What happens in the place?
— Nothing. Literally nothing.
— It dissolves?
— No, it reduces to nothing. And in nothing, everything comes from contradiction and enters
likeness.

The eddies on the sea indicate a direction, structures: they’re the traces of something of
which the whole sea is the narrative, although being equally its forgotten.

Reality closes over what took place like the sea over a drowning man. Only a dead man rises.
But the forgotten — the forgotten is the substance of the sea…

The forgotten is part of life — of living, but we don’t live it.

yes, our eyes will close
and in their place
two holes in stone
vision will no longer have a name
but will always be there
skin of a young sun
and whoever sees will live

Thinking, isn’t it to relate, outside the named, to something I can only touch by depending on
the named? But thinking is equally a wandering in the nameable while awaiting that thing,
yonder, to which one might relate. And if one touches that nothing related to, one discovers it
belongs both to the past and the future, and that it makes identical what one has already
forgotten and what one is going to forget.

The forgotten catches language short. A dizziness follows before which the tongue knows in
itself the extent of its fall.

The event forgets faces; it has no need of these contents: the name is sufficient. And life does
the same, though it has need only to be contained.

The formula chases out the forgotten; the name calls it.

Biography is made of the forgotten, autobiography of memory. But in both the ingredient, the
substance, is the same. Where is the dividing line?

When all goes well, the body is the forgotten of the body.

What plagues me in the mechanism of vision is a forgotten consciousness, though still active,
which unceasingly writes the visible so as to make from it the shape of my relationship with
the world. All our physical activity develops on the forgotten, in such a way that the forgotten
appears to be the science of the body.

And what if writing was only an attempt to read the forgotten? All the forgotten. In that way
the writing would touch on the knowledge of the body...

The forgotten is not mortal because it comes back from death. It is in looking towards the future
that we enter into the mortal.

In the sockets of a skull, the particular look is forgotten: one sees daylight… And that
daylight is our own forgotten, which looks at us with a limitless look.

In the forgotten, there is the death of death.

My body is my only place, but it adheres only to one name, and the function of that name is
to return it to the forgotten, from which it is made.

The risk isn’t here
where you write
and yet what you write
seeks the lip of emptiness
one word more
this word
the eye cuts it off from the hand
and who are you
deprived of what the eye forgets
with a little advance
on the forgotten.

Caesarius of Heisterbach went into the forest. Years passed and he didn't return: he had
forgotten time while listening to the singing of a bird.

If I try to imagine the forgotten, I think of someone, of something I've forgotten. In other
words: I try to remember the forgotten… One must leave the word, then think the absence
which that word barred. But how to think what is not? And which, while not being, doesn’t
deny what is, but is both its past and its future. The forgotten is the only thing which
establishes a likeness between the time when I didn’t exist and the one when I will no longer
exist.

What I’ve forgotten heaps up earth to what I am.

Memory glides on the forgotten like a bird on air. Time envelops the place, but the
timelessness of the place wears that envelope.

Who said: “I have lived once, like the gods”?

Translated by Paul Buck and Glenda George and first published in Sub-Stance 23/24, 1979.