The exhibition The Unhomely at KW Institute for Contemporary Art marks the first institutional solo presentation by Atiéna R. Kilfa (b.1990, FR). Kilfa uses photography, sculpture, video, and installations to explore how personal and cultural memories tend to conflict and overlap. Her most recent work draws on her interest in the composition of models, dioramas, still lives, and tableaux vivants, which she sees as sites loaded with inherited narratives and social codes, opening them up for collective review.

The Unhomely stages a new video work alongside architectural fragments, transactional sound, and miniature sculpture, probing the memory of “home” as an impossible “virtual” architecture. Amidst an all-consuming installation that plays with scale and proportion, the eponymous video work, presented on an architectural stage, places the viewer behind the camera. The narrative of the video unfolds inside a staircase that is perceived as a Huis Clos, a never-ending loop, in which the viewer encounters “architectural ghosts”. These ghosts deviate from the stand-in human silhouettes that oftentimes populate contemporary architectural models, providing us with a sense of depth and scale. The figures in The Unhomely thus become actors themselves, pointing towards the daily lives of their imagined inhabitants, whether real or fictional, and uniting the past and the present.

Two further elements of the installation implicate the presence of the viewer in the production of the work. A scaled miniature of the film’s staircase represents an impossible replica, leaving the viewer with a confusing desire to compare their own position to that in the film and the model. A quotation from both the film and the model, the architectural stage used by Kilfa functions as a Foley instrument that reacts and reverberates to the movement of the audience, adding a sonic and spatial dimension to the experience of the work. Traditionally, Foley is a postproduction technique used to enhance the audio quality in moving images by overlaying synchronized studio recordings of everyday sounds. In Kilfa’s work, however, it serves to further heighten the viewer’s sense of complicity in the production of the work.

The exhibition The Unhomely by Atiéna R. Kilfa is co-produced in partnership with Camden Art Centre in London, where an iteration of the exhibition will be staged from 27 January to 26 March 2023. 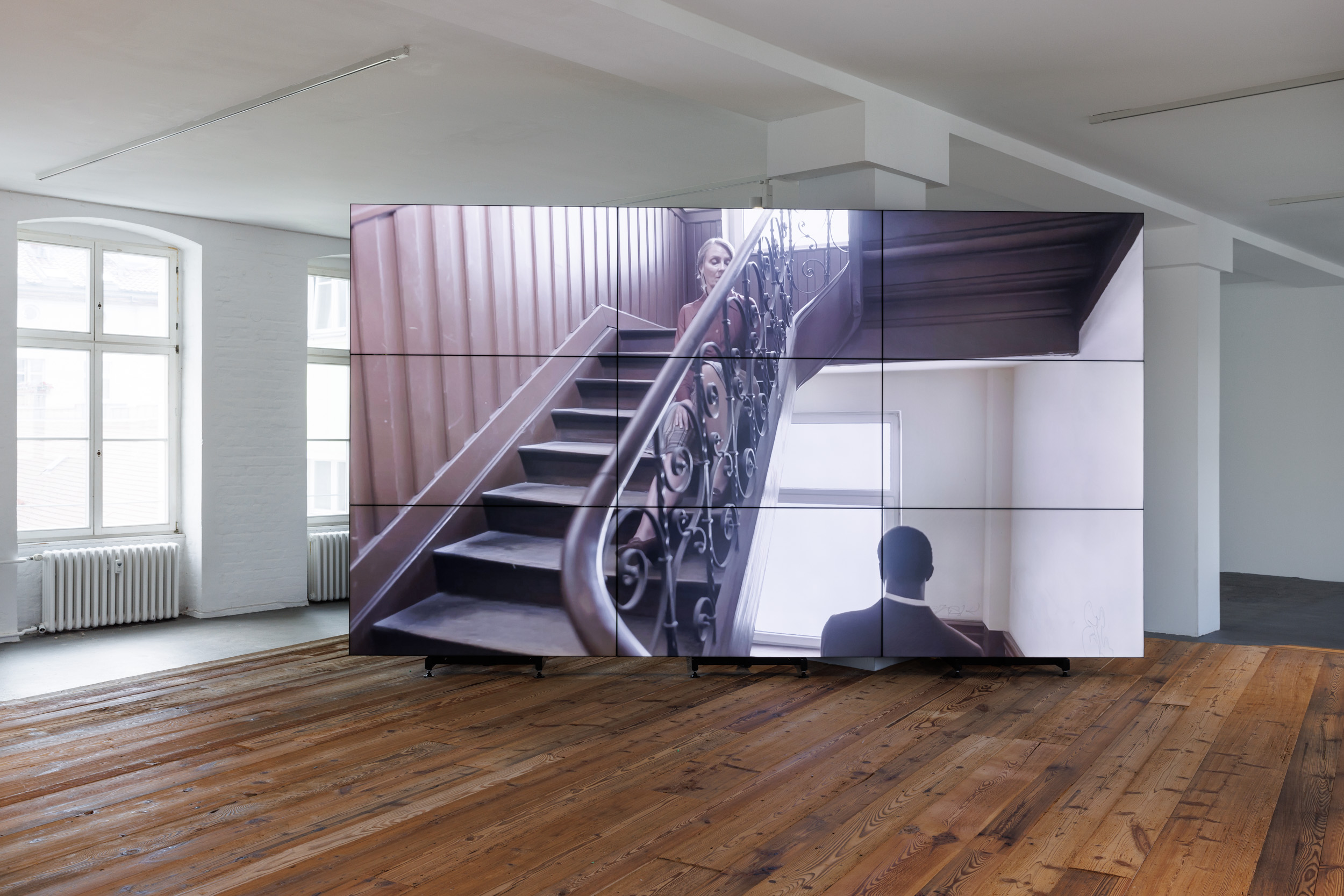 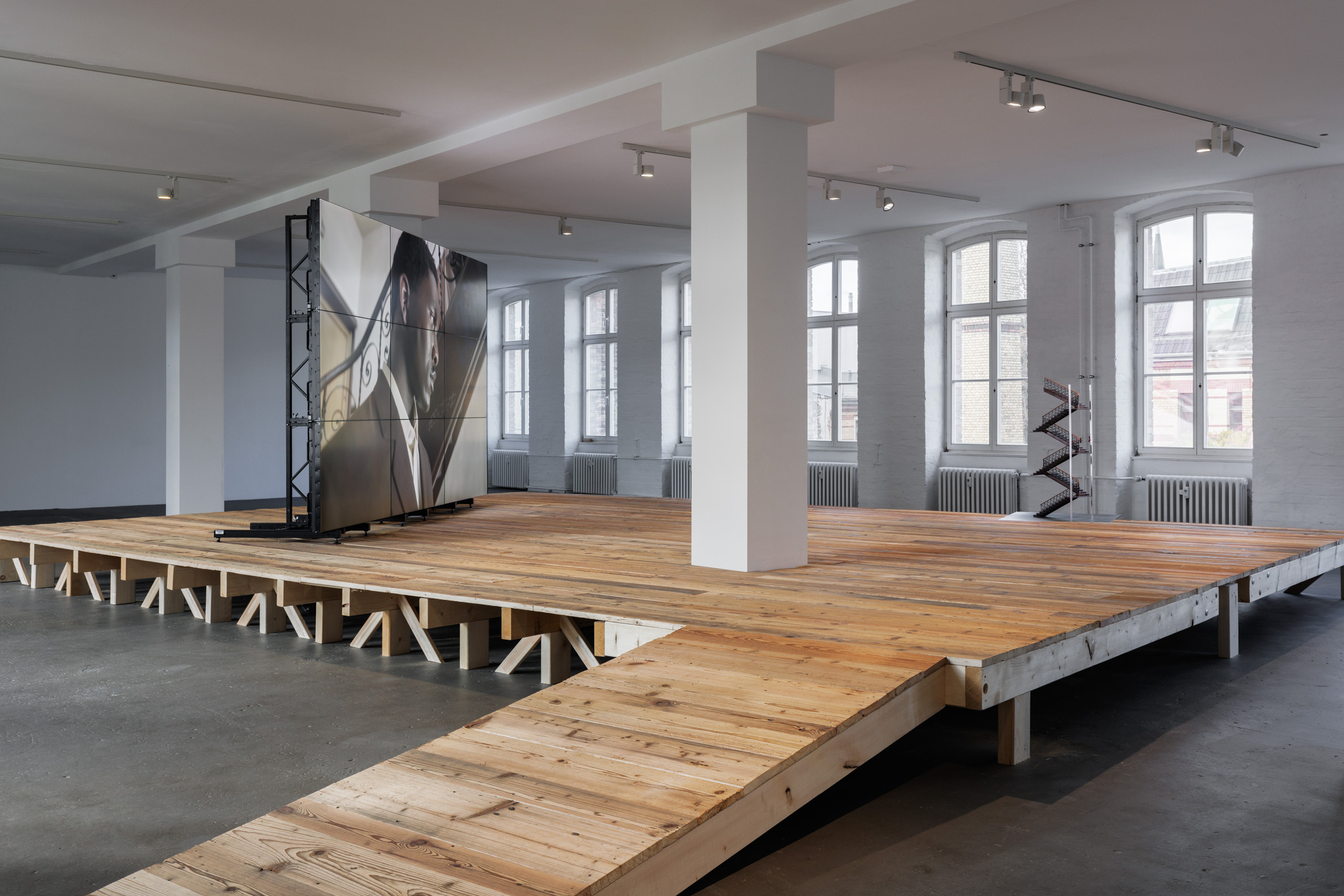 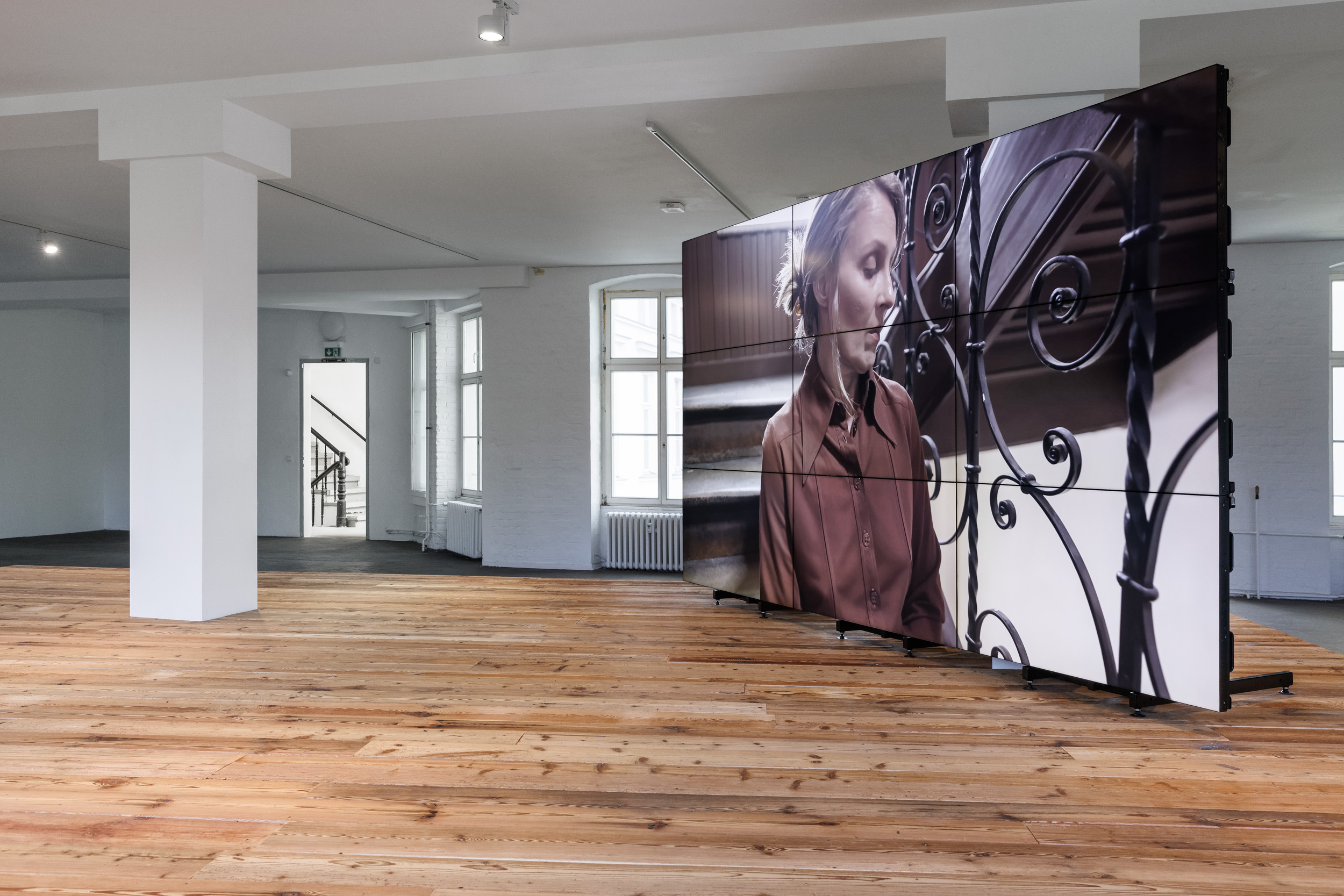 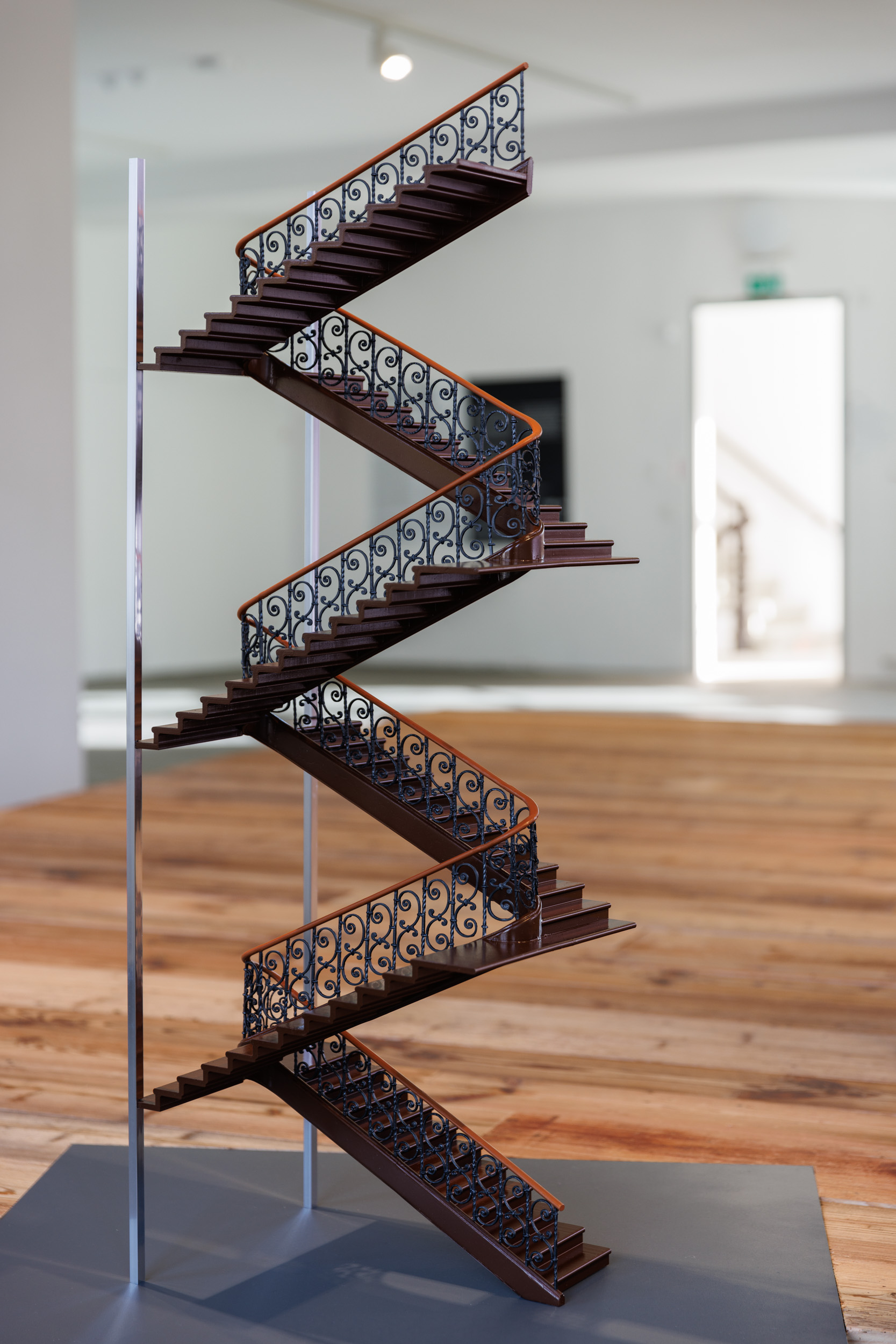 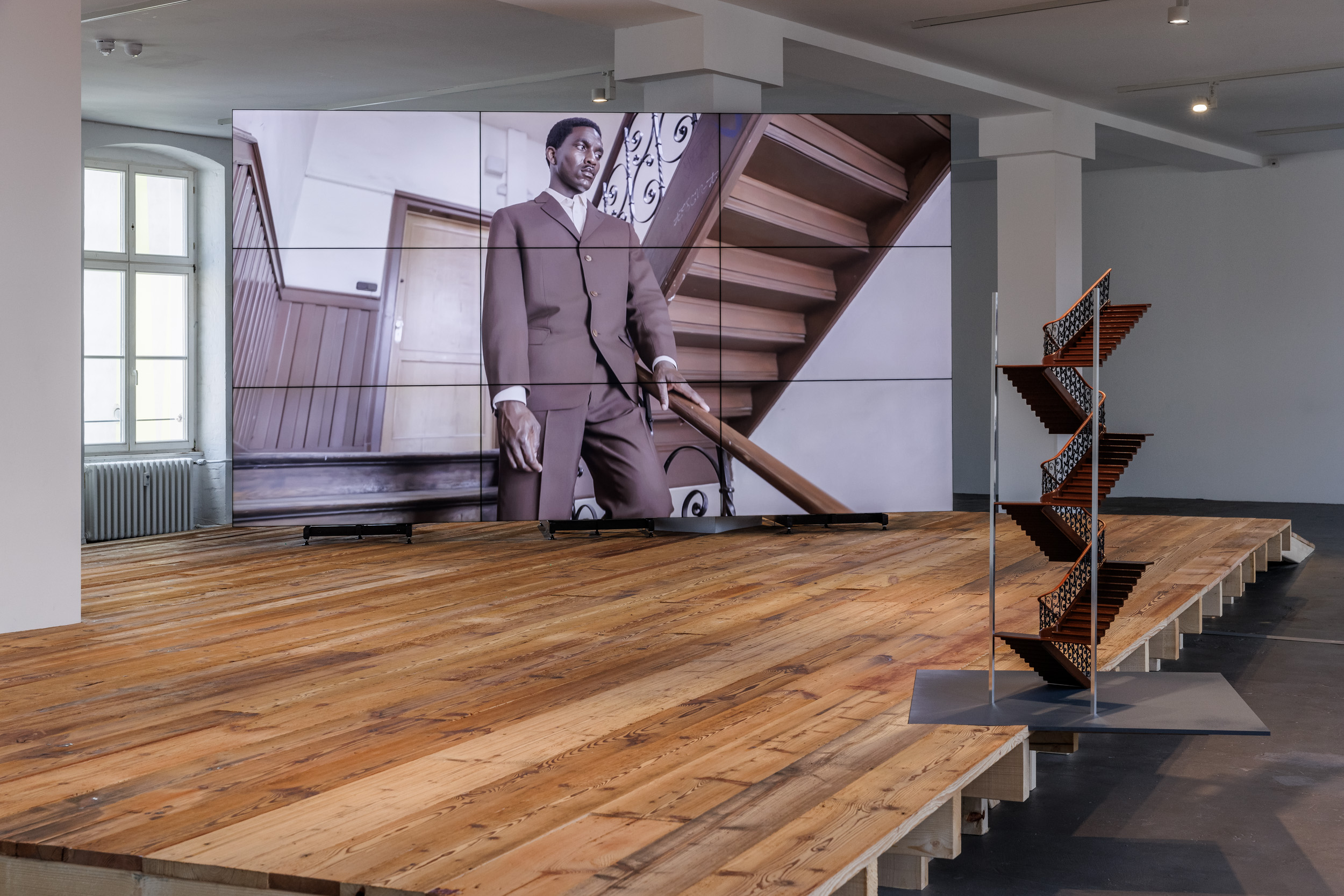